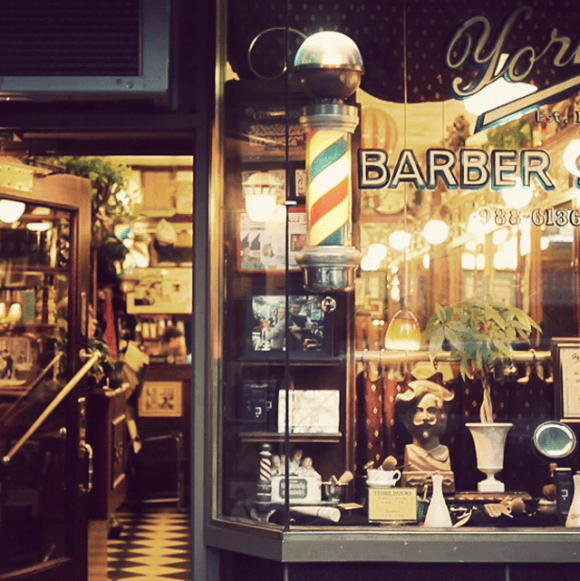 Friendly arguments aren’t hard to find in a barbershop, but try cutting in on a hallowed symbol – that red, white and blue pole – and it may be time to hide the scissors.

Steeped in history and symbolism, those iconic cylinders spinning on storefronts across America are an increasing source of friction between barbers and beauticians. Minnesota, Michigan and North Carolina are the latest fronts in a spreading legislative campaign to reserve the swirling poles for barbers. The proposals, which often include fines for offenders, are driving a new wedge in a trade where gender lines have long run deep.

“The barber pole is the oldest sign in town besides the cross. It should not be displayed where there is not a licensed barber,” said Charles Kirkpatrick, of Arkansas, a barber since 1959 who keeps tabs on such legislation for the National Association of Barber Boards of America.

For many, the only real difference between a barber and hairstylist is the clientele they serve. But barbers say the tools of their trade and unique services they provide make them different, and that laws are needed to prevent beauty parlors, salons and other establishments from passing themselves off as barbershops, including chain shops that bear the barber name and logo but don’t have a single licensed barber on site.

Cosmetologists argue that haircuts are haircuts, and say the protective efforts are silly and chauvinist.

“They’re still trying to hang onto the vestiges that say they’re special. I can cut a man’s hair. Why shouldn’t I be able to put a barber pole up?” said Jeanie Thompson, president of the Minnesota Salon and Spa Association and owner of a beauty parlor. “They’re making a mountain out of a molehill.”

As the story goes, the red on the pole signifies blood, the white stands for bandages and the blue represents veins. The symbolism dates from a time when barbers also performed surgical duties from teeth extraction to bloodletting. They had rods, or poles, for patrons to grip to make veins easier to tap. Barbers often twisted rinsed yet still blood-stained cloths around those same poles before hanging them out to dry.

As the role evolved, the painted striped poles – some spinning, some fixed – became as much of a barbershop hallmark as the ubiquitous jars of blue comb disinfectant and gel-heavy haircuts.

Barbers and cosmetologists both deal in hair, but there are distinctions in the crafts. A barber – a term derived from the Latin word for beard – is uniquely permitted to offer shaves with a straight-edge razor and specially trained to use shears and clippers. Cosmetologists also cut and style hair. But unlike barbers, they usually provide manicures, pedicures and an array of spa-type services as well.

Licensing requirements in the hair trade vary from state to state and by profession. In most cases, they depend on hundreds of hours of training and a yearly fee.

At least 10 states have rules or laws that reserve the pole for barbers, most recently passed in Nebraska and Nevada. Alabama considered going that route in 2010, but the bill stalled.

Ohio long ago outlawed the pole’s use by anyone but barbers. State inspectors find about a dozen violations a year, from salons to dog grooming shops. Howard Warner, executive director of the Ohio State Barber Board, said regulators can impose a $500 fine, but usually just order the pole be taken down.

“We’re not out to beat anyone up or take their money,” Warner said. “Most of the time it’s done innocently.”

The Minnesota bill breezed through a House committee last month and is due for its initial Senate hearing on Wednesday. It hasn’t yet set possible penalties for violators.

Hair professionals in Minnesota have a history of discord. To save money during tough budget times, then-Gov. Tim Pawlenty merged regulatory boards for barbers and cosmetologists in 2004. Years of infighting followed about which industry’s interests got more attention. In 2009, the two were split into separate entities again.

Republican Rep. Bob Gunther, the bill’s sponsor, said he didn’t want to open those old wounds but he understands why barbers are so determined to get a barber pole monopoly.

“It’s been a centuries-long, recognizable symbol of a barber and only a barber,” Gunther said.

In the St. Paul suburb of Rosemount, a barber pole sits outside the Cahill Salon & Barber Parlor, where husband and wife owners Joel and Lisa Martin share space but not an opinion on the legislation.

On one side is Joel Martin’s “Man Cave,” where a pool table, pinball machine and satellite TVs fill out a macho decor. On the other, Lisa Martin’s clients can shop from carefully organized shelves of hair products and wait on white leather couches.

Lisa Martin said anyone who cuts hair should be able to display the pole, and she can’t understand why it has the attention of state lawmakers.

“There’s other things out there they should be more worried about in our industry other than who has a barber pole outside their business for advertising,” she said, ticking off sanitary conditions, for one.

To Joel Martin, it’s about truth in advertising.

“A lot of men will not come into a shop that just says salon because they are looking for someone who has barbering experience,” he said. “It tells people driving by that that’s what they can get here.”